Humans have a much longer and wider penis than the other great apes. Even the largest of gorillas, more than twice as heavy as a human, will have a penis just two and half inches long when erect.

However our testicles are rather small. A chimpanzee’s testes weigh more than a third of its brain while ours weigh in at less than 3%. The relative size of our penis and testes is all down to our mating strategies, and can provide some surprising insights into early human culture.

Primates exhibit all sorts of mating behaviour, including monogamous, polygynous – where males have multiple mates – and multimale-multifemale. One indicator of which behaviour occurs in a species is the size difference between males and females. The greater this sexual dimorphism, the more likely the mating is either polygynous or multi-male to multi-female. This can be shown by observing chimpanzees and gorillas, our closest living relatives.

Male chimpanzees are much larger than females, and they have a multi-male to multi-female mating system. Essentially, male chimps have sex all the time with any female and with any excuse. A female therefore may contain sperm from multiple partners at any one time, which puts the sperm itself – and not just the animals that produce it – into direct competition. For this reason, chimpanzees have evolved huge testicles in order to produce massive amounts of sperm, multiple times a day.

Male gorilla are also much larger than females, but they have a polygynous or harem-style mating system where many females live with a single male. With little or no competition actually inside the uterus, gorillas have had no need for a testicular arms race to facilitate the production of more and more sperm. Their testes, therefore, are relatively small. This is similar to modern humans, whose testes are also of very modest size and produce a relatively small amount of sperm. In fact human sperm count reduces by more than 80% if men ejaculate more than about two times a day. Chimps have huge testicles for their size. Steffen Foerster / shutterstock

The human penis is large when compared with those of our closest relatives: chimpanzees, gorillas, and orangutans. However, primatologist Alan Dixson in his wonderfully detailed book, Primate Sexuality, suggests that if we look at all primates, including monkeys, this is just wishful thinking.

Comparative measurements show the human penis is not exceptionally long. The Hamadryas baboon, for instance, a native of the Horn of Africa, has an erect penis that is five and half inches long – slightly shorter than an average human male, but they weigh only a third of our weight. 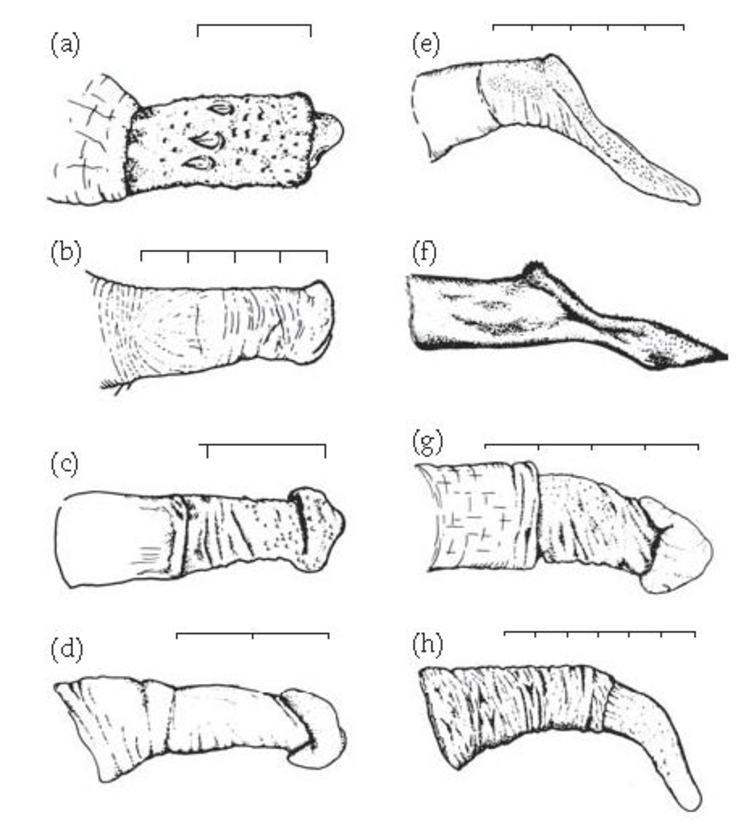 Some of the complex penises found in multi-male to multi-female mating primates such as chimpanzees (h), brown lemurs (a) or macaques (d, e, f). Alan F. Dixson, Primate Sexuality

The human penis is in fact extremely dull – it does not have lumps, ridges, flanges, kinks or any other exciting feature that other primates have. In primates, this lack of penis complexity is usually found in monogamous species.

This observation clashes with the fact that men are significantly larger than women. This suggests our evolutionary background involved a significant degree of polygynous, rather than exclusively monogamous, mating. This is supported by anthropological data showing that most modern human populations engage in polygynous marriage. Anthropologists Clellan Ford and Frank Beach in their book Patterns of Sexual Behaviour suggested that 84% of the 185 human cultures they had data on engaged in polygyny. Primates with simpler penises tend to be monogamous like cotton top tamarins (a) or polygynous like gorillas (g). Alan F. Dixson, Primate Sexuality

However, even in these societies most people remain monogamous. Polygynous marriages are usually a privilege reserved only for high status or wealthy men. It is worth noting that hunter-gathers around the world practice only monogamy or serial-monogamy which suggests that our ancestors may have used this mating system.

At first sight, however, it would seem sensible for males to reproduce with as many females as possible. Human monogamy has long puzzled anthropologists, and lots of effort has gone in to working out what keeps males hanging around.

Three main theories have been put forward. First is the need for long-term parental care and teaching, as our children take a long time to mature. Second, males need to guard their female from other males. Third, our children are vulnerable for a long time and infanticide could be a risk from other males. So to ensure that children are able to reach maturity the male is likely to stay to protect them, both socially and physically. This may be why males have maintained their larger relative size. If we view the evolution of monogamy mating systems in humans through the lens of human society it is clear that it takes a huge amount of social effort to maintain and protect more than one mate at a time. It is only when males have access to additional resources and power that they can protect multiple females, usually by ensuring other males protect them. So monogamy seems to be an adaptation to protect one’s mate and children from other males. This monogamy is reinforced by the high social cost and stress of attempting to do this for multiple partners, and it has become supported by cultural norms.

So when living in complex human societies the largest and most important sexual organ is the brain. Somewhere in our evolutionary past how smart and social we are became the major control on our access to sexual partners – not how big or fancy a male’s penis is.