The Internet has been taken by storm with the groundbreaking news that men appear to lie when asked to measure and report the size of their private parts, with sarcastic people everywhere confirming that bears are believed to defecate in the woodland areas.

And while this nugget of information might not really be unexpected, it is part of a larger analysis on penis size data conducted by Tadaa, Data! ("You do the research, we do the math"), a project run by two data analysis enthusiasts who have developed codes for looking through datasets. And since our patriarchal society is obsessed with penises and their sizes, tech-bloggers Lukas and Tobias have plenty of data to play with.

They used data from the World Penis Average Size Studies Database, which combines a wide variety of datasets from an adult comparison website (I’m not linking to it, you’ll have to search yourself) to medical studies under laboratory conditions, so the analysis might not be super rigorous, but there are still very interesting tidbits to learn from it.

Obviously, the part that has sent the Internet (or at least Reddit and Twitter) into overdrive is the plot that appears to show that men lie. In "self-reported" samples, men added an extra 1 centimeter (0.4 inches) to both their flaccid and erect measurements.The data analysts did point out that although the difference is statistically significant, the cause for said difference could be found elsewhere and might not have anything to do with lying men.

"I just wanted to make fancy plots people like. I didn’t want strangers on Reddit to tell me about their genitals for a day," Tadaa, Data!'s Lukas told IFLScience. 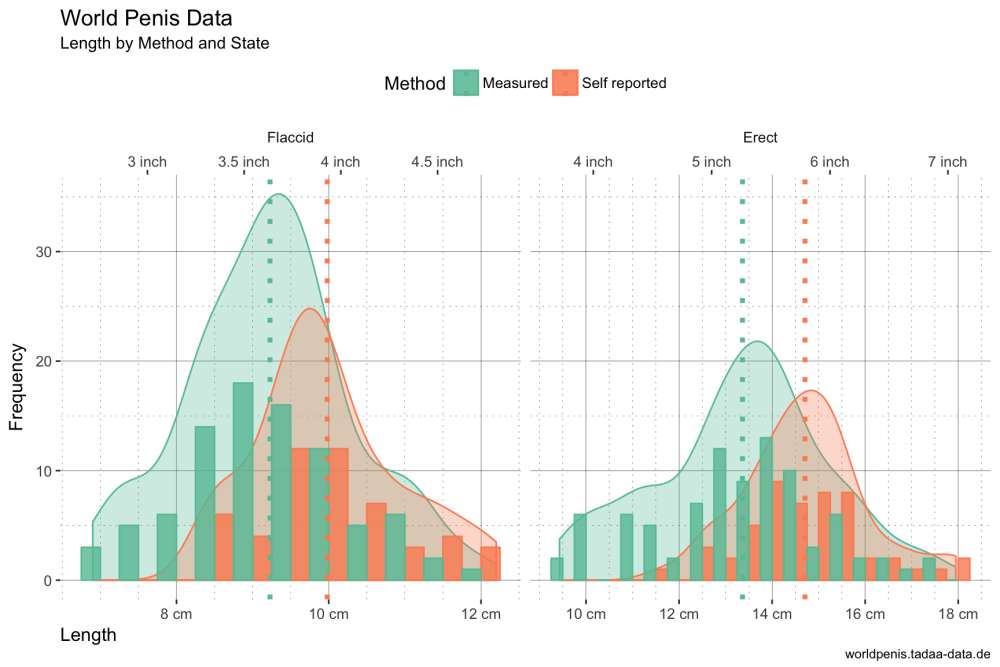 The infamous plot that shows how men lie. Tadaa, Data!

The programmers also pointed out that they only had one data point (either measured or self-reported) per country. However, it appears that the people more curious about penis size reside in Europe and Africa since most of the studies were conducted there. If we consider, instead, the total number of men whose measurements have been reported, Europe is still winning with almost 30,000 followed by South America with 17,000. There seems to be very little info coming from North America. Make of that what you will.

According to the statistics, South Americans have the most impressive growth factor, with a 60 percent increase between flaccid and erect, and it appears (unsurprisingly) that there’s a linear relationship between a soft and a hard penis. On average, add 1.4 centimeters (0.55 inches) to go from one to the other.

The data for both length and girth from their analysis is consistent (in terms of mean and standard deviation) with the famous British Journal of Urology study, so it seems that while the datasets might not be 100 percent accurate, the analysis still manages to whack out the outliers.

If you’re curious, you can check out the whole “just for fun” analysis, as they describe it, on their webpage.