Key symptoms of bulimia nervosa, including the urge to binge eat, are reduced by delivering electricity to parts of the brain using non-invasive brain stimulation, according to new research conducted by our team at King’s College London.

Bulimia is an eating disorder characterised by frequent bouts of binge-eating followed by attempts to counteract the increased food intake via self-induced vomiting, extreme dieting, intense exercise, or the misuse of different medicines. These behaviours, which are typically driven by an over-concern with body weight and shape, become increasingly compulsive until they resemble those of an addiction.

Bulimia typically emerges in adolescence and is much more likely to develop in women, with around one to two percent developing the disorder at some stage in their lives. It is associated with multiple medical complications and up to four percent of sufferers die prematurely from the condition. While existing psychological therapies are effective for many people with bulimia, they do not work for a sizeable proportion of patients, so there is a pressing need for new treatments.

Evidence shows that bulimia is associated with altered functioning in certain brain pathways, such as those underlying self-control processes. It may be possible to normalise these pathways using modern neuroscience technologies like transcranial direct current stimulation (tDCS).

tDCS is a non-invasive brain stimulation technique which delivers weak electrical currents to the brain through two electrodes placed on the head. It is safe and painless, and the most common side effect is a slight itching or tingling sensation on the scalp. 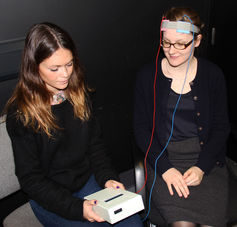 For our research, we investigated the short-term effects of tDCS in people with bulimia. Thirty nine volunteers with the disorder received 20 minutes of real tDCS and 20 minutes of placebo tDCS on two separate days at least 48 hours apart (they were unaware of which session was which). The stimulation was administered to a frontal area of the brain involved in self-control. Volunteers completed several questionnaires before and after each session, which measured their urge to binge eat and several other eating disorder symptoms, such as their fear of weight gain and self-esteem difficulties.

Our results showed that these bulimia symptoms were significantly reduced by the real tDCS but not by the placebo tDCS. For example, baseline scores on the urge to binge eat scale decreased by 31 percent following real tDCS.

We also measured self-control before and after each tDCS session using a decision-making task involving choices about hypothetical sums of money. For each choice, volunteers had to pick between a smaller amount of money available immediately and a larger amount available in three months.

We found that the real but not the placebo tDCS made people more willing to wait for the larger, delayed sums of money. This reflects more sensible decision-making and better self-control.

Our study suggests that tDCS may suppress the urge to binge eat and reduce the severity of other symptoms in people with bulimia, at least temporarily. We think it does this by improving self-control. Although these are modest, early findings, with a larger sample and multiple sessions of tDCS over a longer period of time, it is likely that the effects would be even stronger. This is something we’re now looking to explore in future studies.

The advantage of tDCS is that it’s much less expensive and more portable than other brain stimulation techniques, which raises the possibility of one day offering treatment that could be self-administered at home by patients with bulimia. This could either be as an addition to existing psychological therapies or as a standalone, alternative approach.