‘White Whale’: Wild Orca Is One Of Only Four Of Its Kind Ever Seen

A rare white whale was spotted by researchers recently, making waves off the east coast of Russia.

The animal passed right by the scientists' boat.

Erich Hoyt, co-director of the Far East Russia Orca Project and research fellow with Whale and Dolphin Conservation, shot the footage during an expedition as part of a humpback whale project.

In the Fourth Kuril Strait, between Onekotan and Paramushir islands, we met a large aggregation of orcas, but soon after we started photographing them for photo-IDs, the fog thickened. Soon, we couldn’t see anything further than hundred meters, so we stopped to listen for the sounds. Suddenly a group of orcas approached us, and right next to the boat, a white orca surfaced. It was not the famous Iceberg, but a small white orca, likely a juvenile. We soon lost the whale in the fog, but the image was fixed in our mind and in this short piece of video. We hope to meet more white orcas next year.

Iceberg, another white whale, became a media sensation a couple years back when he was spotted off the Russian coast. 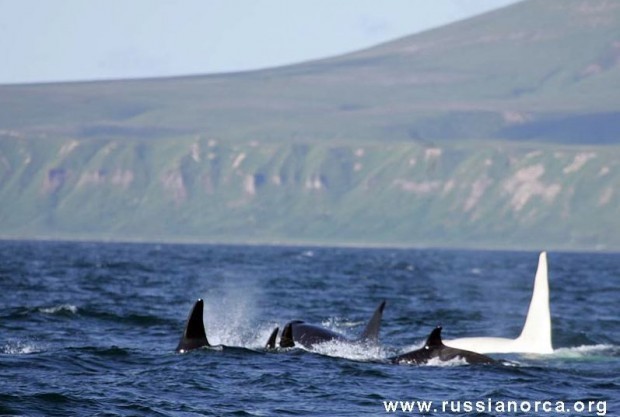 White orcas are a rare find. But Hoyt told The Dodo that this isn’t the only one of its kind.

“We have seen one female we call Mama Tanya; a calf; Iceberg the mature male; and now this juvenile,” he said. “Four white orcas in all over the past seven to eight years.”

It’s not yet confirmed by scientists, but some theorize that their white coloring could be caused by albinism, a congenital disorder marked by the absence of pigment in the skin. Another notable white marine mammal was spotted earlier this year during the brutal dolphin hunts in Taiji, Japan. Nicknamed “Angel” by activists, she was taken captive and still lives in a tank at the Taiji Whale Museum.

Researchers continue to pursue these “white whales” — just like Captain Ahab did in search of Moby Dick. But now, all the scientists want is information about these elusive animals.