The site of the Chernobyl Nuclear Power Plant in northern Ukraine has been surrounded for more than three decades by a 1,000-square-mile (2,600-square-kilometer) exclusion zone that keeps people out. On April 26, 1986, Chernobyl’s reactor number four melted down as a result of human error, releasing vast quantities of radioactive particles and gases into the surrounding landscape – 400 times more radioactivity to the environment than the atomic bomb dropped on Hiroshima. Put in place to contain the radioactive contaminants, the exclusion zone also protects the region from human disturbance. 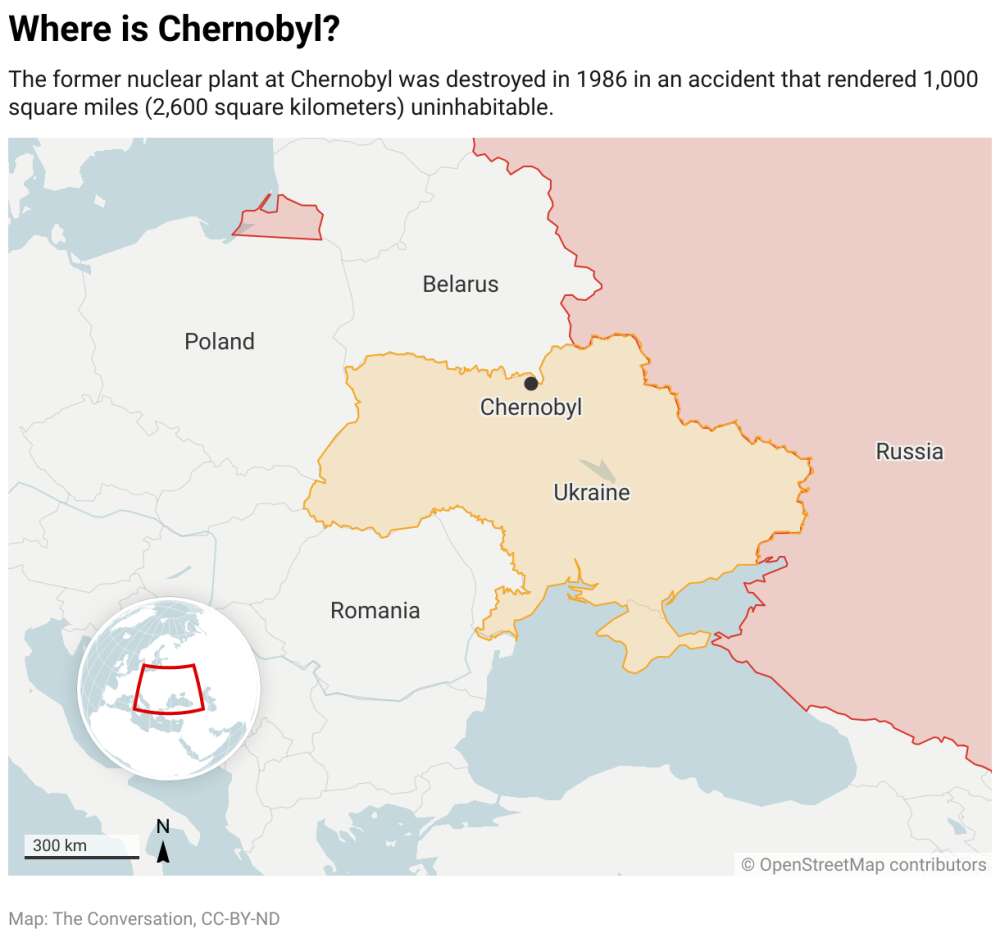 Apart from a handful of industrial areas, most of the exclusion zone is completely isolated from human activity and appears almost normal. In some areas, where radiation levels have dropped over time, plants and animals have returned in significant numbers.

I’ve spent more than 20 years working in Ukraine, as well as in Belarus and Fukushima, Japan, largely focused on the effects of radiation. I have been asked many times over the past days why Russian forces entered northern Ukraine via this atomic wasteland, and what the environmental consequences of military activity in the zone might be.Some scientists have suggested the zone has become an Eden for wildlife, while others are skeptical of that possibility. Looks can be deceiving, at least in areas of high radioactivity, where bird, mammal and insect population sizes and diversity are significantly lower than in the “clean” parts of the exclusion zone.

Why invade via Chernobyl?

In hindsight, the strategic benefits of basing military operations in the Chernobyl exclusion zone seem obvious. It is a large, unpopulated area connected by a paved highway straight to the Ukrainian capital, with few obstacles or human developments along the way. The Chernobyl zone abuts Belarus and is thus immune from attack from Ukrainian forces from the north. The reactor site’s industrial area is, in effect, a large parking lot suitable for staging an invading army’s thousands of vehicles.

The power plant site also houses the main electrical grid switching network for the entire region. It’s possible to turn the lights off in Kyiv from here, even though the power plant itself has not generated any electricity since 2000, when the last of Chernobyl’s four reactors was shut down. Such control over the power supply likely has strategic importance, although Kyiv’s electrical needs could probably also be supplied via other nodes on the Ukrainian national power grid.

The reactor site likely offers considerable protection from aerial attack, given the improbability that Ukrainian or other forces would risk combat on a site containing more than 5.3 million pounds (2.4 million kilograms) of radioactive spent nuclear fuel. This is the highly radioactive material produced by a nuclear reactor during normal operations. A direct hit on the power plant’s spent fuel pools or dry cask storage facilities could release substantially more radioactive material into the environment than the original meltdown and explosions in 1986 and thus cause an environmental disaster of global proportions.

Environmental risks on the ground in Chernobyl

The Chernobyl exclusion zone is among the most radioactively contaminated regions on the planet. Thousands of acres surrounding the reactor site have ambient radiation dose rates exceeding typical background levels by thousands of times. In parts of the so-called Red Forest near the power plant it’s possible to receive a dangerous radiation dose in just a few days of exposure.

Radiation monitoring stations across the Chernobyl zone recorded the first obvious environmental impact of the invasion. Sensors put in place by the Ukrainian Chernobyl EcoCenter in case of accidents or forest fires showed dramatic jumps in radiation levels along major roads and next to the reactor facilities starting after 9 p.m on Feb. 24, 2022. That’s when Russian invaders reached the area from neighboring Belarus.

Because the rise in radiation levels was most obvious in the immediate vicinity of the reactor buildings, there was concern that the containment structures had been damaged, although Russian authorities have denied this possibility. The sensor network abruptly stopped reporting early on Feb. 25 and did not restart until March 1, 2022, so the full magnitude of disturbance to the region from the troop movements is unclear.

If, in fact, it was dust stirred up by vehicles and not damage to any containment facilities that caused the rise in radiation readings, and assuming the increase lasted for just a few hours, it’s not likely to be of long-term concern, as the dust will settle again once troops move through.

But the Russian soldiers, as well as the Ukrainian power plant workers who have been held hostage, undoubtedly inhaled some of the blowing dust. Researchers know the dirt in the Chernobyl exclusion zone can contain radionuclides including cesium-137, strontium-90, several isotopes of plutonium and uranium, and americium-241. Even at very low levels, they’re all toxic, carcinogenic or both if inhaled.

Perhaps the greater environmental threat to the region stems from the potential release to the atmosphere of radionuclides stored in soil and plants should a forest fire ignite.

Such fires have recently increased in frequency, size and intensity, likely because of climate change, and these fires have released radioactive materials back into the air and and dispersed them far and wide. Radioactive fallout from forest fires may well represent the greatest threat from the Chernobyl site to human populations downwind of the region as well as the wildlife within the exclusion zone.

Currently the zone is home to massive amounts of dead trees and debris that could act as fuel for a fire. Even in the absence of combat, military activity – like thousands of troops transiting, eating, smoking and building campfires to stay warm – increases the risk of forest fires.

There is no “safe” level when it comes to ionizing radiation. The hazards to life are in direct proportion to the level of exposure. Should the ongoing conflict escalate and damage the radiation confinement facilities at Chernobyl, or at any of the 15 nuclear reactors at four other sites across Ukraine, the magnitude of harm to the environment would be catastrophic.It’s hard to predict the effects of radioactive fallout on people, but the consequences to flora and fauna have been well documented. Chronic exposure to even relatively low levels of radionuclides has been linked to a wide variety of health consequences in wildlife, including genetic mutations, tumors, eye cataracts, sterility and neurological impairment, along with reductions in population sizes and biodiversity in areas of high contamination.

This article is republished from The Conversation under a Creative Commons license. Read the original article.