When a hurricane bears down over land, its violently swirling winds pulverize the surface by whipping down trees and buildings and unleashing flood-inducing torrents of rain. Nothing about this meteorological phenomenon seems slow; in fact, to be considered a hurricane, a tropical cyclone must reach wind speeds over 120 kilometers per hour (74 miles per hour).

Yet according to a researcher from the US National Oceanic and Atmospheric Administration (NOAA), hurricanes have been moving across the planet more and more sluggishly since the mid-20th century – a trend that foretells increasingly devastating storms in the future, as the longer a hurricanes hovers over one area, the more time it has to inflict damage.

“The unprecedented rainfall totals associated with the ‘stall’ of Hurricane Harvey over Texas in 2017 provide a notable example of the relationship between regional rainfall amounts and tropical-cyclone translation speed,” climate scientist James Kossin wrote in Nature.

Translation speed refers to the rate by which hurricanes are carried along by belts of background environmental wind known as steering winds. In his study, Kossin examined observational data collected from storms occurring in hurricane-affected regions in both hemispheres and concluded that the average translation speed of global hurricanes declined 10 percent during the period between 1949 and 2016.

And though all hurricane areas showed a decline in speed, his analysis indicates that tropical cyclones passing over land in the western North Pacific and North Atlantic have decelerated by an alarming 30 and 20 percent, respectively.

Kossin was motivated to explore this topic after a wealth of recent studies found that anthropogenic global warming is slowing Earth’s steering winds. (The sharp temperature gradient between air circulating at the poles and air circulating around the equator drives the motion of steering winds, and thus, rapid warming in the Arctic and Antarctic weakens winds by flattening the gradient.)

Despite expecting, logically, that the data would show a lowering of hurricane translation speed during the 67-year window, a period during which the planet warmed by 0.5°C, Kossin was surprised by the magnitude of the effect.

“I'm not sure that I was quite prepared for the amount of slowing that I did find,” Kossin said in a statement. Given that global warming is projected to boost rainfall in wet areas, he speculates that a double whammy effect will occur as a higher proportion of hurricanes stall, as Harvey did, in years to come.

Furthermore, it is already widely accepted that hurricane severity will increase due to climate change. Officials and residents of affected areas should plan accordingly. 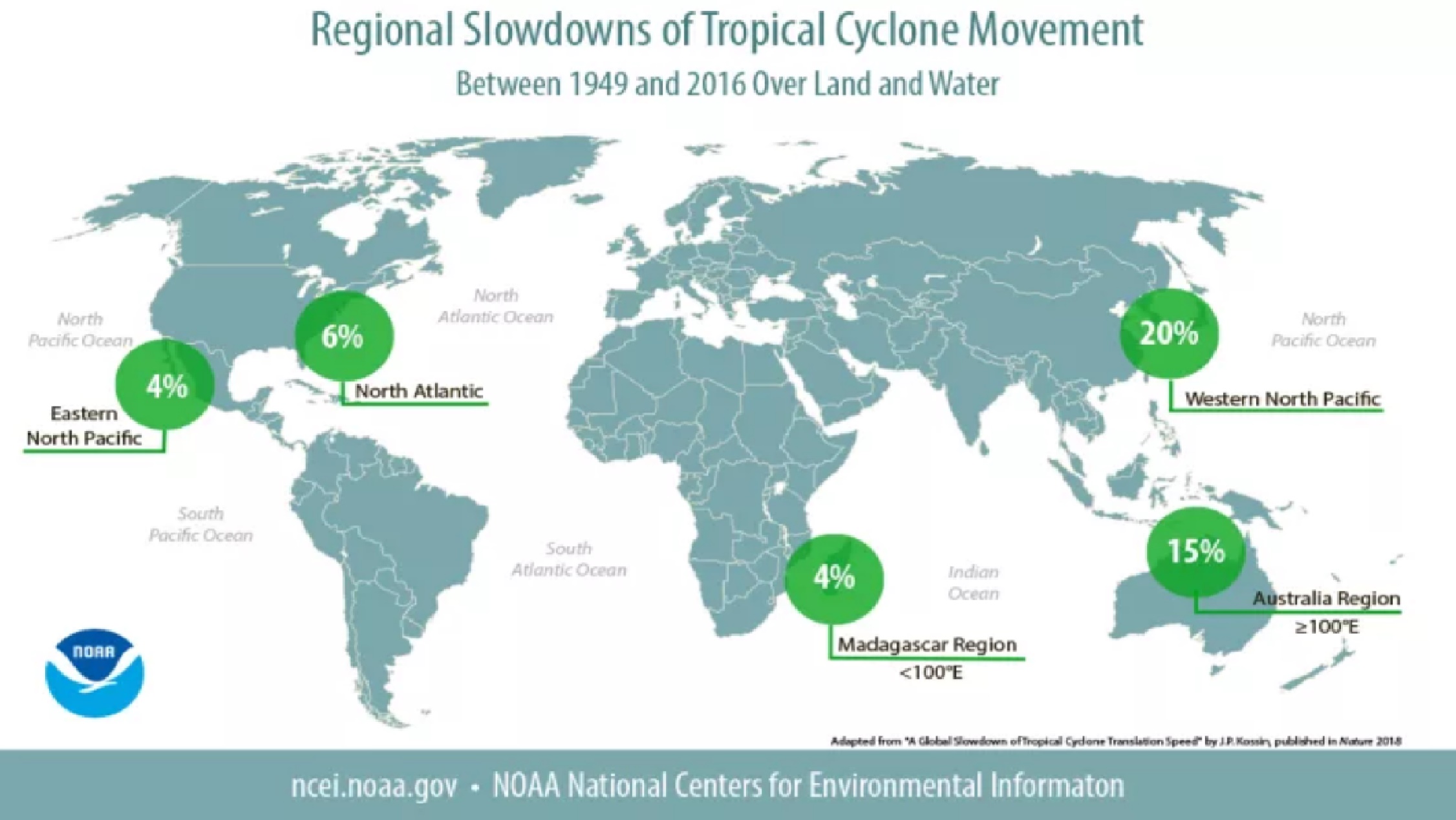 Some climate scientists have expressed uncertainty over whether this study’s observational data is sufficient to support the link between global warming, translation speed, and rainfall, yet Kossin is unfazed.

He points to a climate modeling-based investigation published earlier this year that found that past tropical cyclones would have had faster wind speeds, lower storm translation speeds, and higher precipitation rates if they occurred in warmer climates.

“That gives us more confidence that the slowing is there and is related to warming.”