China’s concerns about air pollution from burning coal is one reason behind the emissions slowdown. China coal image from www.shutterstock.com

Emissions from emerging economies and developing countries grew by 0.9% with the fourth-highest emitter, India, growing at 5.2% in 2015. 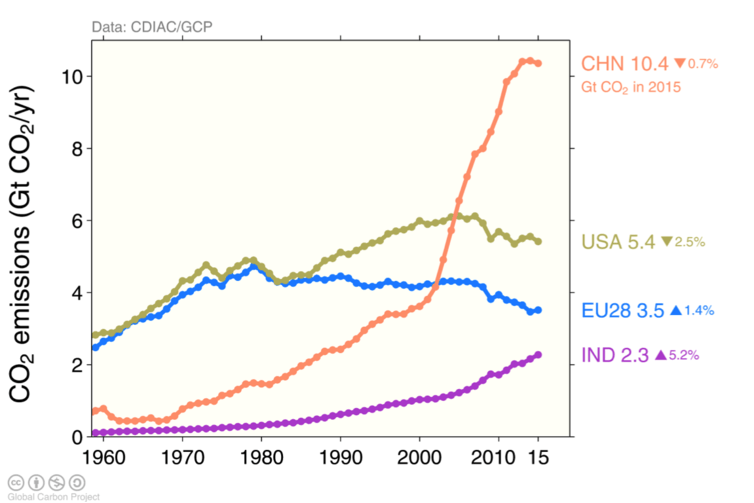 CO₂ emissions from the combustion of fossil fuels and industry for the top 4 global emitters.

This jump in land use change emissions was largely the result of increased fires at the deforestation frontiers, particularly in Southeast Asia, driven by dry conditions brought by a strong El Niño in 2015-16. In general, though, long-term trends for emissions from deforestation and other land use change appear to be lower for the most recent decade than they were in the 1990s and early 2000s.

When combining emissions from fossil fuels, industry, and land use change, the global economy released another 41 billion tonnes to the atmosphere in 2015, and will add roughly the same amount again this year.

We now need to turn this no-growth to actual declines in emissions as soon as possible. Otherwise, it will be a challenge to keep cumulative emissions below the level that would avoid a 2℃ warming, as required under the Paris Agreement.

As part of our carbon budget assessment, we estimate that cumulative emissions from 1870 (the reference year used by the Intergovernmental Panel on Climate Change to calculate carbon budgets) to the end of 2016 will be 2,075 billion tonnes of CO₂. The remaining quota to avoid the 2℃ threshold, assuming constant emissions, would be consumed at best in less than 25 years (with remaining quota estimates ranging from 450 to 1,050 billion tonnes of CO₂). Ultimately, we must reduce emissions to net zero to stabilise the climate. The carbon budget to keep mean global temperature below 2℃ above pre-industrial levels with more than 66% probability, showing used carbon budget (black) and remaining carbon budget (red). Values rounded to nearest 50 billion tonnes of CO₂. The remaining quotas are indicative and vary depending on definition and methodology.