A Sixth Sense? How We Can Tell That Eyes Are Watching Us

It’s easy to tell the direction of the human gaze. Laurinemily at English Wikipedia

We’ve all had that feeling that somebody is watching us – even if we’re not looking directly at their eyes. Sometimes we even experience a feeling of being watched by someone completely outside our field of vision. But how can we explain this phenomenon without resorting to pseudoscientific explanations like extrasensory perception (or a “sixth sense”)?

The human fascination with eyes lies at the heart of the issue. Eyes are the window into the soul, goes the saying. And it’s no wonder we’re so interested in them – the human brain is highly tuned to lock onto the gaze of others. It’s been suggested that there’s a widespread neural network in the brain just dedicated to the processing of gaze. Scientists have already identified a specialised group of neurons in the macaque brain that fire specifically when a monkey is under the direct gaze of another.

We also appear to be wired for gaze perception. The mechanism that detects eyes and shifts our attention towards them may be innate – newborns just two to five days old prefer staring at faces with direct gaze, for example, (over averted gaze).

It’s not just our brains that are specialised to draw us to the gaze of others – our eyes are also exceptionally formed to catch attention and easily reveal the direction of gaze. Indeed, our eye structure is distinct from almost all other species. The area of our eye surrounding our pupil (the sclera) is very large and completely white. This makes it very easy to discern the direction of someone’s gaze. In many animals, by contrast, the pupil takes up a lot of the eye, or the sclera is darker. This is thought to be an adaptation to camouflage the eye in predators – cleverly hiding the direction of gaze from potential prey. 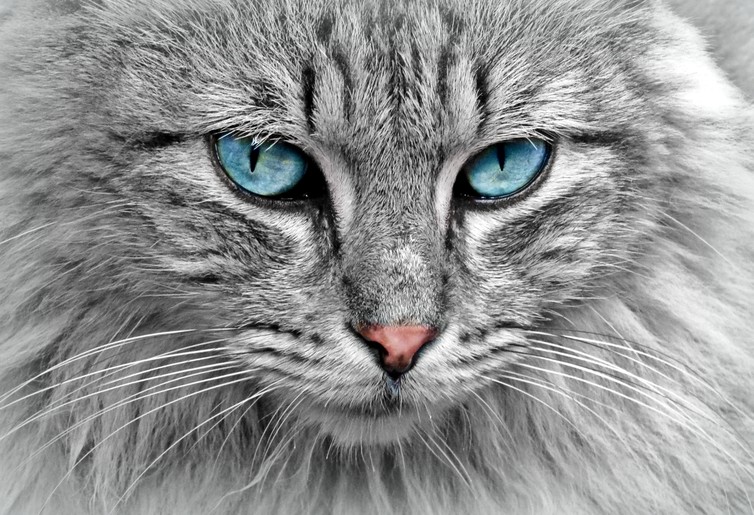 It can be hard to tell exactly where a cat is looking. Pixabay

But why is gaze so important that it needs all this specialised processing? Basically, eyes provide us with insights into when something meaningful is happening. Shifts in attention from another person are able to, almost reflexively redirect our attention in line with their gaze. Our heightened attention to gaze is thought to have evolved to support cooperative interactions between humans, and is argued to form the foundation for many of our more complex social skills.

Disturbances of normal gaze processing are seen across a wide range of conditions. For example, people on the autistic spectrum spend less time in general fixating on the eyes of others. They also have more trouble extracting information from eyes, such as emotion or intentions, and are less able to tell when someone is looking directly at them. On the other extreme, highly socially anxious people tend to fixate on eyes more than those with low anxiety, even though they show increased physiological fear reactions when under the direct gaze of another.