For the first time, chimpanzee mothers have been filmed teaching their children to use tools in the wild. The mothers took time away from their own hunting to show their offspring how to use twigs to capture termites.

“Wild chimpanzees are exceptional tool users, but in contrast to humans, there has been little evidence to date that adult chimpanzees teach youngsters tool skills,” said Stephanie Musgrave, a graduate student at Washington University, St. Louis.

Although research earlier this year proved human children spontaneously adopt tool use without being taught, learning is often essential. Likewise, dolphins' use of sponges for hunting is thought to be passed from mother to child, although some dolphin genius must have come up with the idea.

A video from the study

A study last year found that young chimpanzees take up tools of their own accord, and spend their youth playing with them while their close relatives bonobos concentrate on building social networks.

However, in Scientific Reports, Musgrave has revealed film taken by tree-mounted cameras showing that adult chimps pass on tools to their young, who then put them to use.

This happens often enough that Musgrave was able to observe patterns, including that there is a price to pay for the teaching, primarily the handing over of a useful tool to a less experienced operator. This is important, since situations where one individual learns by watching another, but no sacrifice is made by the more experienced beast, are not considered to represent teaching by animal behaviorists. 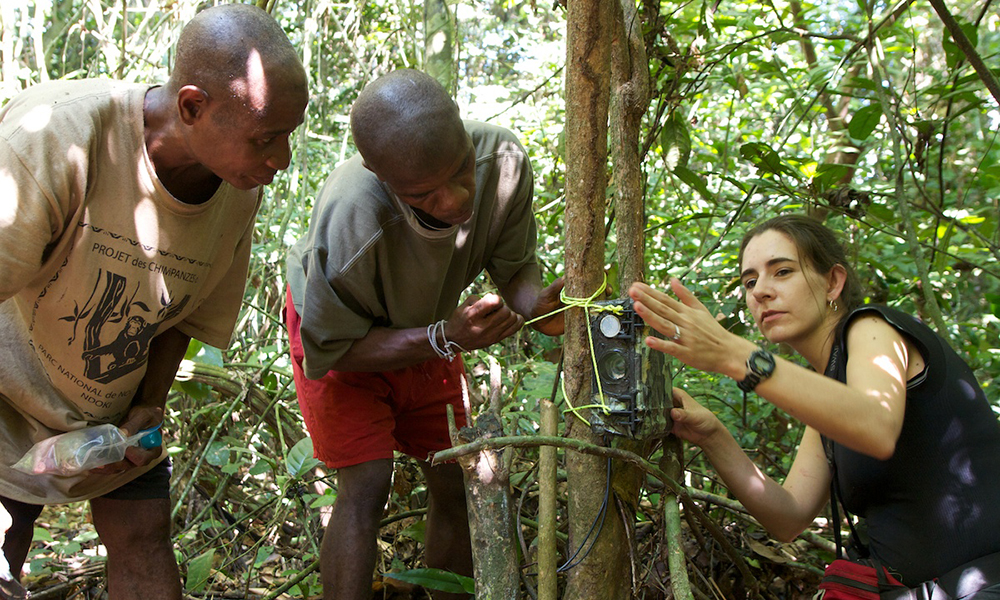 Co-author Dr Crickette Sanz and colleagues mount a camera on a tree to observe chimpanzees in the wild without disturbing them. Ian Nichols

Sticking a twig into a termite nest may seem simple, but the chimpanzees of the Goualougo Triangle in the Republic of Congo are much more sophisticated. They match the type of twig to the sort of nest they are trying to penetrate, and modify the ends into a brush-like tip to sweep up insect prey.

In every one of the 96 examples Musgrave filmed, the immature chimpanzee sought the probe from his or her mother or older sister. In some cases the adult both anticipated the child's interest and planned for it, bringing a second suitable probe to the termite nest, apparently preparing to hand one over.

In other cases, reluctant to give up their only termite-catching tool, mothers split the twig lengthways so each could use one. Whatever their approach, the teachers captured fewer termites in the 30 seconds following passing on their knowledge and equipment than they did beforehand, demonstrating that the process involved a real sacrifice.

Simply being given a tool was not sufficient for young chimps to suddenly learn how to make their own. The 96 filmed transfers were between 13 teachers and the same number of pupils, and the lifetime total per chimp is unknown.

“Our research shows that the evolutionary origins of this behavior are likely rooted in contexts where particular skills are too challenging for an individual to invent on their own.” said co-author Dr Crickette Sanz.

Musgrave noted that observations of how chimpanzees acquire tool use could help us understand how we did the same thing early in our evolution.

And to think, Jane Goodall was mocked for reporting a chimpanzee made tools at all.